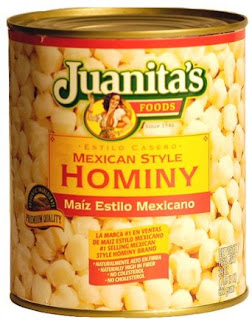 I’ve posted about how it is hard it is to determine the real nutritional data for foods before. (Here is a past article about dueling labels on dairy products: http://carbwars.blogspot.com/2009/09/when-does-16-x-049-zero.html.) I do my best to check things out to be sure my information is correct, and I contact the companies if there is any question, just to be sure. When I first noticed that the net carb count on Mexican Style hominy was significantly lower than that for regular hominy (4 net in a 1/2 cup serving versus about 20 for regular hominy), I was skeptical. I called the company and was assured that they had actually tested the product and the counts were accurate. As a result, I included a few hominy recipes in a chapter about corn in my first book, Carb Wars, as well as some that used an heirloom variety of Iroquois white corn that was being grown, harvested, and ground by hand by native Americans in New York state. Iroquis white corn is a flint variety (zea mays indurate), so less starchy than other kinds. Tragically, the tribal leader who started the co-operative, John Mohawk, died suddenly just when Carb Wars came out, and his company, Pinewood Products, went out of business. (Some of the people involved with the project still tell me that they hope to eventually have this corn for sale again.)

The hominy recipes have been among the most popular ones in Carb Wars. Although I don’t routinely check my blood glucose levels, some of my recipe testers do, and I also heard from others who reported that Juanita’s and Teasdale’s Mexican Style hominy did not spike their blood sugar. It seemed reasonable that turning corn into hominy could affect its starch content. It is made by a process called nixtamalization, in which the corn is dried and then soaked in a lye solution that removes the germ and outer shell and causes the kernel to puff up, much like popcorn, which would affect its volume. I also included a few recipes in Nourished, although I am cutting down on all grains now.

When a reader contacted me and expressed doubt about the low carb count for hominy, I got in touch with Juanita’s again to double check and was again told that the numbers were correct. The reader followed up and began her own dialog with the folks at Juanita’s and finally convinced them to run a new analysis of the product. It turns out that the original tests were conducted 60 years ago. The new label, below, reflects the results of the new analysis: 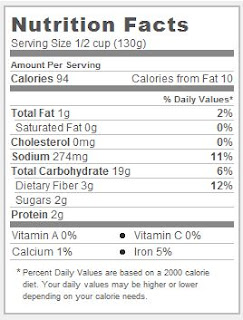 New label from Juanita’s Hominy can, on current website.

This is the label from Teasdale’s Mexican Style hominy, which shows the same data as the old Juanita’s can:

Two reps from Juanita’s called me to give me notice that their label was going to change, but asked me not to mention it until it actually happened. They were very apologetic and even offered to have the company chef contact me to help with recipe development. Thank you, Suzanne B, for your persistence is pursuing the truth and kudos to Juanita’s for stepping up to correct their error.

So what can we conclude from all this? As I’ve said before, nutrition data is soft science at best, and we have to consider all of it as nothing more than a rough estimate. It may be that my recipes include enough fat and protein to offset the effect of the carbs. However, I suspect that modern corn may be very different from the corn that was tested 60 years ago. Dr. Davis’s book, Wheat Belly, makes the case that wheat is a totally new plant thanks to genetic tinkering, and corn has likely been altered as much or more than wheat.

What do you think? Have you been able to eat Mexican Style hominy without  negative repercussions? Do you react to it as if it were 4 net carbs per serving or 16?

The working title for my first book was, “You’ll Never Know What You Are Missing.” It summed up my goal: to make eating for health synonymous with eating for pleasure. Once you discover the secret, you will find that the very best food for weight management, longevity, the treatment and prevention of disease, and over-all health and happiness is also the most sumptuous, satisfying, and indulgent way of eating the world has to offer. You are invited to the feast. Enjoy!
View all posts by Judy Barnes Baker →
0 0 votes
Article Rating
Subscribe
Login
19 Comments
Oldest
Newest Most Voted
Inline Feedbacks
View all comments

Yes, Iroquois White Corn is back! I sent them an e-mail to see if they have the nutrition data for it.

Thanks for the tip, PlantsHeal! I will check it out. I hope you are right.

Iroquois White Corn is available again. Check out http://www.iroquoiswhitecorn.org/ I would love to see nutritional value for this corn. It has not been "tinkered" with so I suspect the 60 year old Juanita values might be closer to the truth.

This could be a game changer 🙂

I hate to ask, Judy, but if you've got a contact at Teasdale, I'd love to know the absolute truth. It's my belief that this little kernel of knowledge is … the final frontier. (FINGERS CROSSED!!)

If Hominy doesn't spike your blood sugar, I'm in 🙂

Hi DJ.
I'd guess that Teasdale's used the same data that Juanita's used and just haven't rechecked it lately, so I'd be wary of thinking it is really lower. I can ask them, though.

I never had a problem with eating a serving of Juanita's hominy, and 16 is still a lot lower than a regular serving of potatoes or rice. I only ate it occasionally as a treat anyway.

Wow! Thanks Judy, for your work! I use Juanita's hominy in several recipes. I did notice more of a rise in bg than I expected, but not terrible. I will check more carefully from now on.

Any word on the Teasdale brand? Is that also wildly outdated info, or can I still rely on that brand?

Cheapside: I think that is the most likely explanation. If we could find a source for heirloom white corn, we could learn how to make our own hominy, right?

I first learned about Iroquois white corn from a book about foods recommended as low-carb for diabetics by Gretchen Becker, so it is surely lower in carbs than modern corn or at least much lower glycemic.

This comment has been removed by a blog administrator.

Do you think the difference in the nutrition values could be the results of the modified corn over the years?

Thanks for this great information. Labels can be tricky. In still unsure about alcohol sugars??? Count or not count

I don’t count sugar alcohols. The Net Carb Count means carbs minus fiber and sugar alcohols in most protocols. A few do include fiber, which has the effect of greatly reducing the number they are allowed. They say since some fiber is turned into fat in the large intestine, it would have calories. I’m not concerned about calories from fat, however, so that doesn’t matter to me.

I have checked with La Preferida (Teasdale) and discovered that the displayed label is incorrect. The correct nutrition per 1/2 cup is 18gms total carbs, 2gms fiber, 260mg salt.

Has the label changed again? Thanks for the update, Paul.

This website uses cookies to improve your experience while you navigate through the website. Out of these cookies, the cookies that are categorized as necessary are stored on your browser as they are essential for the working of basic functionalities of the website. We also use third-party cookies that help us analyze and understand how you use this website. These cookies will be stored in your browser only with your consent. You also have the option to opt-out of these cookies. But opting out of some of these cookies may have an effect on your browsing experience.
Necessary Always Enabled
Necessary cookies are absolutely essential for the website to function properly. This category only includes cookies that ensures basic functionalities and security features of the website. These cookies do not store any personal information.
Non-necessary
Any cookies that may not be particularly necessary for the website to function and is used specifically to collect user personal data via analytics, ads, other embedded contents are termed as non-necessary cookies. It is mandatory to procure user consent prior to running these cookies on your website.
SAVE & ACCEPT
wpDiscuz
19
0
Would love your thoughts, please comment.x
()
x
| Reply
Share this ArticleLike this article? Email it to a friend!
Email sent!